Monument in memory of the Jagomasts

The monument was erected with the support of members of the Ethnographic Society, soldiers of the Mechanized Infantry Brigade Iron Wolf of the Lithuanian Armed Forces and others. For many years Rūta Hakaitė, a parishioner of Vilnius Evangelical Lutheran Church, took care of this symbolic tomb. Today, the members of the Vilnius Evangelical Reformed Society regularly maintain the environment of the monument.

At the beginning of 1933, after Hitler came to power in Germany, Nazism spread rapidly in the state administration and society. The Jagomast family, known in East Prussia for the defence of Lithuanian rights, was also persecuted by the Nazis. In 1935, during the trial of the Nazis Ernst Neumann and Theodor Zass in Klaipėda – they had tried to organise a military coup in Klaipėda region – the crowd broke the windows of the Jagomasts’ house in Tilsit and intended to destroy the nearby ‘Lituania’ printing house. In 1940, on the orders of the Tilsit Gestapo, the publication of the Lithuanian newspaper Naujasis Tilžės keleivis (the New Passenger of Tilsit) was banned, and the Jagomasts were exiled. On 30 October 1940, they came to live in Soviet-occupied Vilnius. After the Nazis occupied Lithuania, on 21 August 1941, Ona Jagomastaitė (1900–1941) and her husband Emilis Vilmantas-Mecklenburg were arrested and shot the next day in Paneriai. On 23 August 2 Enzis Jagomast and his wife Anna Martha (1870–1941), sons Dovas (1904–1941) and Jurgis (1917–1941) were also shot dead in Paneriai. Another Jagomast son, Emilis, lived in Germany at the time. His further fate is unknown. 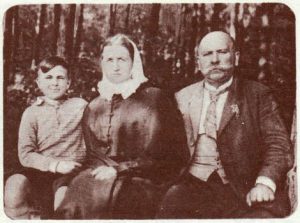 Inspired by her father, the eldest daughter of Enzis Jagomast Ona Jagomastaitė (1900–1941), became an influential figure in the society of Lithuania Minor. From 1920, she worked in her father’s printing house and became his assistant and the editor of Naujasis Tilžės keleivis (the New Passenger of Tilsit). As the editor, Ona Jagomastaitė featured many political articles that were unacceptable to the prevailing Nazi regime in 1933. In 1936, Ona Jagomastaitė was banned from editing the newspaper and had to work secretly. There is an interesting story about Ona and Emilis Mecklenburg. While working in her father’s printing house, Ona Jagomastaitė met Emilis Mecklenburg, an employee of the municipality of Tilsit. His mother was Lithuanian (her maiden name was Vilmantaitė). Despite the negative attitude of the Nazi administration and repeated warnings, Mecklenburg married Ona and was consequently dismissed from office. After becoming Emilis Vilmantas-Mecklenburg, Ona’s husband became a member of the Jagomast family and joined his father-in-law’s printing house, and shared the destiny of the family. 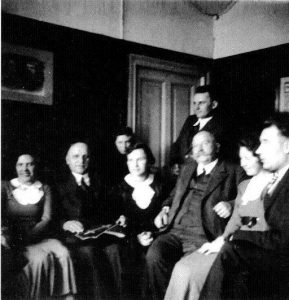 Dovas Jagomast (1904–1941) also participated in the social activities of Lithuania Minor and wrote articles for Naujasis Tilžės keleivis (the New Passenger of Tilsit). From 1937 he officially headed the ‘Lituania’ printing house and after his forced exile to Soviet-occupied Lithuania in 1940, he became a German language lecturer at Vilnius Folk University. 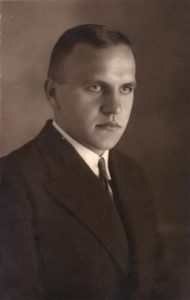 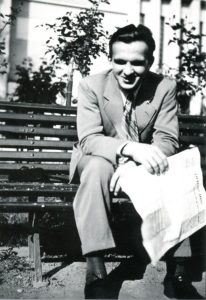 Jurgis Jagomastas in the courtyard of Kaunas War Museum (1938).

Very little is known about the life of the middle son, Emilis Jagomast (b. 1910). He is known to have settled in Dresden after leaving his parents’ home in Tilsit. His further fate is unknown.

Enzys Jagomastas with his son Jurgis. Library of Kaunas University of Technology.
The printing-house Lituania in Tilsit owned by Enzys Jagomastas. Lithuania Minor – faces and images before 1937. Vilnius, 2000.
Enzys Jagomastas (seated on the right), owner of the publishing-house and printing house in Tilsit, employees (M. Renkewitz, J. Schück, H. Plath) and pupils, 1897. Kaunas, D. Mažosios Lietuvos knyga: lietuviškos knygos raida [The Book of Lithuania Minor: Development of the Lithuania Book, 1547-1940, Vilnius, 1996.
Back Next
Return to the map